Hollywood Sound has been in business at the same location since 1982, serving the audiophile community locally, as well as around the world. We buy, sell, trade and consign new and preowned audio components. Our showroom incorporates two well treated sound rooms for demonstrations. We have an in-house service center for repairs, modifications, and testing of components that we have taken in trade. Our shipping department is well trained in packing preowned equipment so that it arrives alive.

Reproduced music should communicate the emotion and content of the original performance. We truly care what our customers buy. Therefore we are willing to spend the time needed so you, the customer, are sonically satisfied. Whether you are making your audio purchase from us on the internet or in our store, you will sense that you are dealing with a company you can trust and can rely on for quality sales and service. Audio questions are always welcome do not hesitate to contact us.

We are dedicated to a format that refuses to go away because in our opinion, there is nothing that beats it short of master tapes and that is Analog. That's right! Turntables, Tonearms and Cartridges. We have never strayed away from this wonderful emotion provoking medium since the opening of our store in 1982.

There are many other dealers selling Turntables out there in audio land but there are just a few dealers that I would put my faith in their ability to setup a Turntable properly. The phono cartridge installation and alignments can make or break the fidelity that any given analog system can hope to produce. Tonearms and cartridges require proper matching so they work together in harmony. Audiophiles should get what they pay for.  We do our best to make that so.

We are not a dealership to take lightly. We are not a huge mail order house like you see so often on the Internet. These companies offer just about every high-end product in production today. A-Z They figure that they can't miss if they offer everything. Do they truly care about what you the audiophile ends up with or are these order takers just trying to make as much commission as they can? That would be fine if these order takers had the experience to guide you through the frustrating process of component selection that will work well together and stay within your budget.

We do not believe in shopping carts. This may be fine for a few accessories but not when it comes to the hardware that can bring you so close to the music. We believe in the long term relationship. We like to talk to our customers and give proper advice. Many audiophiles have a good idea of what they are looking for in their audio system. It is our job to make sure that they do not spend their money in needless ways. It is your hard earned money. It is your ears. It is your passion.

Experience and knowledge is the key to a quality dealer such as ourselves. You will never get the snob approach when you contact us. Here is a tip that can save you thousands of dollars in the long run:
The “Source”, meaning a Turntable or CD player is at the beginning of the audio chain.

This is where the music /audio signal starts. I am sure some of you have heard the old saying....."junk in junk out" The source is the most important part of any good audio system. This is where one should not nickel and dime themselves. Well enough said......I hope to hear from some of you good people, whether you are a novice or a hard core veteran. .......all are welcome!

Do you think turntables are as passé as manual typewriters? That vinyl records are found only in dusty attics?

Think again. Larry Weinstein, owner of Hollywood Sound, sells new and used high-end audio components to music lovers who are willing to invest a little more into their sound systems - the kind of people who turn up their noses at many of the systems sold in chain stores the same way a wine connoisseur might turn up his or her nose at Burgundy aged in a neighbor's garage. Hollywood Sound handles all types of high-end equipment, but Weinstein has a special place in his heart for customers who prefer the sounds made by analog systems - turntables and needles that play vinyl records.

There are two kinds of people who listen to music, Weinstein said. "One kind is listeners who use music as a background for activities. The other kind is the person who will sit in a certain spot between the two speakers and listen intently. "Instead of turning on the TV at night, they'll turn on their stereos, and sit and listen as if they were watching TV - they truly get involved in the music."

It is the second kind of listener who buys components from Weinstein. The products he sells are made mainly for music aficionados by smaller U.S. companies like Cary Audio, VPI Industries and Eminent Technologies.

There are probably about 500 such manufacturers, Weinstein estimated. They're small cottage industries who design for hobbyists and serious music lovers," he said. "Most people aren't even aware of the high-end market." The price of a new high-end component may be five or six times what a person would pay for something mainstream, Weinstein said. So several years ago, he began focusing on used equipment, which now makes up about 80 percent of his sales. "It used to be mostly new equipment I sold," he said. "But I saw a trend: people were looking at my used rack and not my new stuff."

He buys the used pieces mostly from private owners who are upgrading or simply selling their equipment. He also does service work and equipment modification. Customers come through word of mouth and from ads he places on audio related news groups on the Internet. About 50 percent of his business is generated online, and comes from all over the world. Most customers are college-educated professionals. The business grew gradually. Weinstein has always enjoyed music and loved listening to his parents' stereo system when he was a child."When I was 15, I bought my own system that was higher-end than theirs," he said. From then on, it was an electronic love affair. "I was fascinated with the equipment," he said. "I would buy it for personal use, and eventually I was buying so much I decided I should open a store." 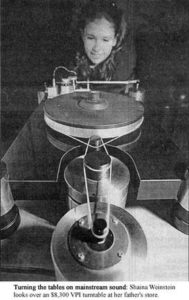 He opened Hollywood Sound in December 1982 with an investment of $10,000, mostly money he had earned over the years selling equipment informally.

A new high-end component may cost five or six times more than a mainstream one.

"There's been a resurgence in sales in turntables and vinyl because analog sounds better," Weinstein said. "There's more information retrieval. No matter what you do with digital, at some point it has to come back to analog."

Weinstein compared digital music to taking a piece of steak, grinding it into hamburger, and then pressing it back into a steak. "Digital doesn't compare to analog, and the real music lovers will go to the trouble of changing the record and keeping it clean."

Frank Goldfarb, a consultant to the medical equipment industry and a Hollywood Sound customer, said analog systems are worth the extra work. "There's a small but fervent group of us throughout the world who think vinyl sounds better than CDs," he said. "But the systems need to be set up properly rather than just plugged in, and [Weinstein] is an expert at it."

The digital vs. analog question is ongoing, said Jonathan Scull, senior editor at Stereophile magazine in Sante Fe, N.M. "There's always been a core group out there who realize what many consider to be the superiority of vinyl," he said. "When you put together a good system with a good table, arm and cartridge and mount it properly, the sound can be very wonderful."

Some new digital formats can sound as good as vinyl, Scull added. "You might say they're analog-sounding," he said.

The high-end equipment needed to produce the quality of sound preferred by Weinstein's customers doesn't come cheap. New turntables sold at Hollywood Sound range from about $300 to as much as $10,000. "The cartridge alone might cost $3,000," Weinstein said.

Jeff Addis, an airline pilot who lives in Sunrise, has been shopping at Hollywood Sound since 1990 and has bought thousands of dollars worth of equipment. He has some CDs, but prefers to play his collection of vinyl records on a turntable. "I'm an audiophile, and to my ears, a good record on a good turntable sounds far more like real music than a compact disc," Addis said. Weinstein "is probably the only guy from Key West to Palm Beach who has a good mix of new and used equipment that focuses on two-channel sound."

The store also caters to those who prefer tube electronics. "Those old vacuum tube electronics that glow in the dark make incredible music," Weinstein said. "It just sounds better than solid-state."

Hollywood's downtown redevelopment hasn't yet reached Weinstein's location at 523 21st Ave., but it doesn't really matter: He could do business just about anywhere, he said.

"People either know about this high-end stuff or they don't, and people who are looking for new or used high-end are going to search me out."

"Only about 1 percent of the population cares about this kind of equipment."